Rules of Summer by Shaun Tan 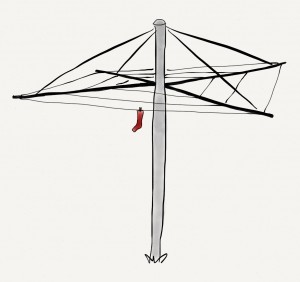 Rules of Summer by Shaun Tan is a book about… well it took me a while to decide. The first time I read it I thought it was about the experience of a child living in a world of seemingly arbitrary rules. But I read it again and noticed the dedication, ‘For the little and the big’. After my second reading I was pretty convinced that it’s actually about having a bossy older sibling making arbitrary rules! As a bossy older sibling I recognized the symptoms! The rules include ‘never leave a red sock on a clothesline’, ‘never give your keys to a stranger’ and the rather sad ‘never wait for an apology’. As I’ve come to expect from a Shaun Tan book, the illustrations are beautiful, whimsical and emotive, conveying a story that goes much deeper than the simple words they illustrate.