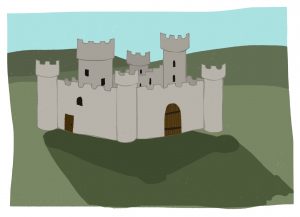 Howl’s Moving Castle by Diana Wynne Jones is a YA fantasy book. I knew it was a winner as soon as I saw that it has chapter titles like “In which Howl expresses his feelings with Green Slime”. It follows the character of Sophie who is turned into an elderly woman by an evil witch. She finds work as a housekeeper in a floating castle that belongs to the notorious Wizard Howl. The sequels, The Castle in the Air and The House of Many Ways, are also enjoyable, although not quite as terrific as Howl. It’s been turned into a movie by Hayao Miyazaki which contains much of the delight of the book but with a slightly different type of weirdness to the weirdness of the original.